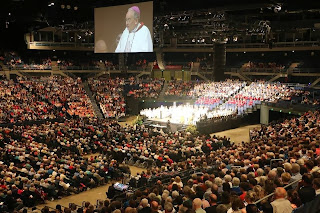 Thanks to Bishop Barry Jones for providing "food for faith" with this copy of his homily delivered at yesterday at the Faithfest Mass in the CBS Arena, Christchurch.

Everywhere, today, the Catholic Church will be honouring Jesus Christ, the King of the Universe. It is the conclusion of the Church year.

On this great feast, we honour and give glory to Jesus Christ the King of the universe.

In the reading, St. Paul describes Jesus as “the image of the unseen God, and the first-born of all creation, for in him were created all things in heaven and on earth; everything visible and everything invisible… before anything was created, he existed, and he holds all things in unity…” These are words of course from the first reading.

A great paradox marks our feast and we must take notice of it. We give glory and honour to Christ the King with trumpets and choirs and hymns and incense. At the same time, within the Mass, the Church puts before us the Gospel scene of Jesus dying his agonising death by crucifixion. St. Luke tells us that “the people stayed there before the cross watching Jesus”.

It is quite likely that it was for sport and entertainment that they stayed and watched this excruciating torture. Or did they remember his healing miracles, his hours of spell binding teaching, his blessing of their children? His mother Mary and her woman companions stayed and watched, as did John... Some love accompanied his suffering.

“As for the leaders, they jeered at him. 'He saved others’ they said, ‘let him save himself if he is the Christ of God, the Chosen One.’ Their incomprehension of the mystery is hardly worthy of criticism or blame. The rejection of Jesus, his suffering and violent death, seem even now an unlikely way for God to intervene in our world in order to end the reign of sin and to transform human life. In their understanding, Jesus should come down from his cross.

Two robbers were crucified with him. One of them abused Jesus and told him to save himself and to save them if he was really the Christ.

The other robber, the so-called good thief, defended Jesus. He told the abuser that while they both deserved their sentence, Jesus did not. “This man has done nothing wrong,” he said to the abusing robber. Then, another aspect of the paradox. The good thief began to pray. The crowd views the spectacle, the leaders jeer, one robber abuses him, and the other prays; “Jesus” he prays, “remember me when you come into your kingdom.”

His prayer uncovers the truth of this ugly crucifixion. The death of Jesus, and his rising again to new life, is no accident of history. It is not the result of chance or an unfortunate coincidence of circumstances. When Jesus replied to him, he made clear that his death, and resurrection, was a passage from this world to his Father. “Today,” he told the good thief, “you will be with me in paradise.” These are words of divine mercy. They give us hope because they show us that the mercy of God can search for us, and find us, right up to the end of life. “Today, you will be with me in paradise.”

Where Jesus is present, there the kingdom of God is present. He is the eternal Son who took human flesh from Mary, precisely so that he might enter our world and our history. The purpose of his coming was to enter into our experience of suffering and evil and death, and to transform them by love.

As we know, Jesus died with a prayer on his lips commending himself into the hands of his Father. As St. Paul reminded us “God wanted all perfection to be found in him, and all things to be reconciled through him and for him, everything in heaven and everything on earth, when he made peace by his death on the cross.”

It is a paradox that the kingship of Jesus is not made known to us by the usual signs of royalty - not by palaces, armies, luxurious living or the dominance of power and might. His kingship is revealed to us by his cross- it is the cross that reveals him as priest, as teacher, and as lord and king. His way is the way of apparent weakness. His rule is not one of coercion or force – it is, rather, a rule based on the appeal of truth and self-giving love, to the end.

“Jesus, remember me when you come into your kingdom.” These beautiful words enabled the good thief to entrust himself completely to Jesus. We all can make his words our prayer because to accept Jesus as King means to be in a living friendship with him, it means that we pray to him and that we listen to him.

We give thanks today for our faith in Jesus which bring us together today around the altar of God, on which the sacrifice of Jesus is made present so that we can join our weak and imperfect prayers to his great prayer.

This gathering makes it clear that we learn the truth about Jesus only in the Church and through the Church. While our faith is intensely personal, - no one can have it for us, nor can we have it for someone else - our faith is also intensely ecclesial and communal; we come to faith in Jesus by joining in with the People of God, which is Christ’s Church. It is in and through the Church that Jesus feeds us with his Word, and with his holy sacraments.

St. Augustine calls the Church “our Catholic mother” because she brings us to birth by offering us the Word of God and the sacraments, through which the Holy Spirit transforms us and makes us holy.

Today we thank God for the gift of faith which always comes to us as an undeserved blessing – pure grace. It enables us to understand hidden truths which light up the whole of life, as far into the future as enabling us to see the meaning of suffering and death.

We thank God for the many activities and blessings of the Year of Faith which is now coming to its close. We thank the Father for the gift of Jesus, the eternal Son, who took his human nature and birth from Mary, mother of all who put their faith in him.

Let us make our own this prayer of Pope Francis to Our Lady;

“Mother, help our faith.
Teach us to see all things
with the eyes of Jesus,
that he may be light for our path.
And may the light of faith
always increase in us,
until the dawn of that undying day
which is Christ himself, your Son, our Lord.” 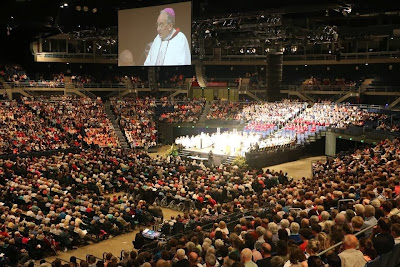 tapping this image will lead you to the mid-2010 postings

tap the image to view the 2010 Holy Land pilgrimage postings